Bruce Lee: Does He REALLY Live Up To His Legendary Status? 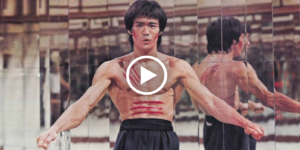 Perhaps the greatest and best-known martial artist of all time wasn’t a wizened old man in ancient China or Japan, but a warrior, film actor and director, and writer in the 20th century. Bruce Lee, whose real name was Lee Jun-fan, was a cultural symbol, a driving force in the representation of Asians in cinema, and a master of the combative arts whose skill was virtually unparalleled.

Bruce Lee started in Wing Chun Kung Fu when he was a teenager, a martial art he learned in his childhood in Hong Kong. His master was Ip Man, on whom the film Ip Man was loosely based. Lee got involved in several street fights in his youth, and to protect his life, his parents sent him to the United States In 1959, where he finished high school and proceeded to attend the University of Washington in 1961, with a major in drama. He took a variety of other classes as well, ranging from psychology to nutrition.

Lee began teaching martial arts shortly after his arrival in the US, providing instruction in his personal style which he called Jun Fan Gung Fu, a style that represented his personal approach to Wing Chun. Lee was later invited to attend the 1964 Long Beach International Karate Championships, in which he made several demonstrations including his famous one-inch punch.

The exhibition at the Long Beach event resulted in him being invited to several auditions and castings in various TV series over the next few years, which marked the beginning of a filmography that would only rise and flourish.

In between jobs and prior to his rise as a movie star, Bruce Lee created Jeet Kune Do, a practical approach to what he believed was excessive rigidity, inflexibility, and formalism in existing martial arts.

Lee’s first appearance on the big screen was a few months old, something Lee did not remember. At age 6 he started his career in Hong Kong cinema. Neither of these could compare to the rise of Bruce Lee as a movie star in his adulthood. He returned to Hong Kong in the hopes of finding success and landed it by signing on with Golden Harvest and delivering the two-punch combo of “The Big Boss” and “Fist of Fury” in two consecutive years, both of which were incredible box office successes. Forming his own production company, he created his own film, Way of the Dragon, over which he was given total creative control as director, screenwriter, choreographer, and lead actor. Lee had his former student, Chuck Norris, play his final opponent in the film, in a showdown in the Colosseum that is widely regarded as one of the greatest martial arts fight scenes in cinematic history.

In 1972, Warner Bros. and Golden Harvest joined forces to create “Enter the Dragon,” starring Bruce Lee. The landmark martial arts film heralded the “Kung Fu Craze” of the 70s and positioned Lee as a legend in martial arts all over the world.

Bruce Lee was never able to witness his explosion of popularity after that last film. He died six days prior to its release. However, his legacy as the face of martial arts, as a master of skill and technique, and an ambassador of the Asian community to the Western world, made him far more than just a martial artist, just a director, and actor.