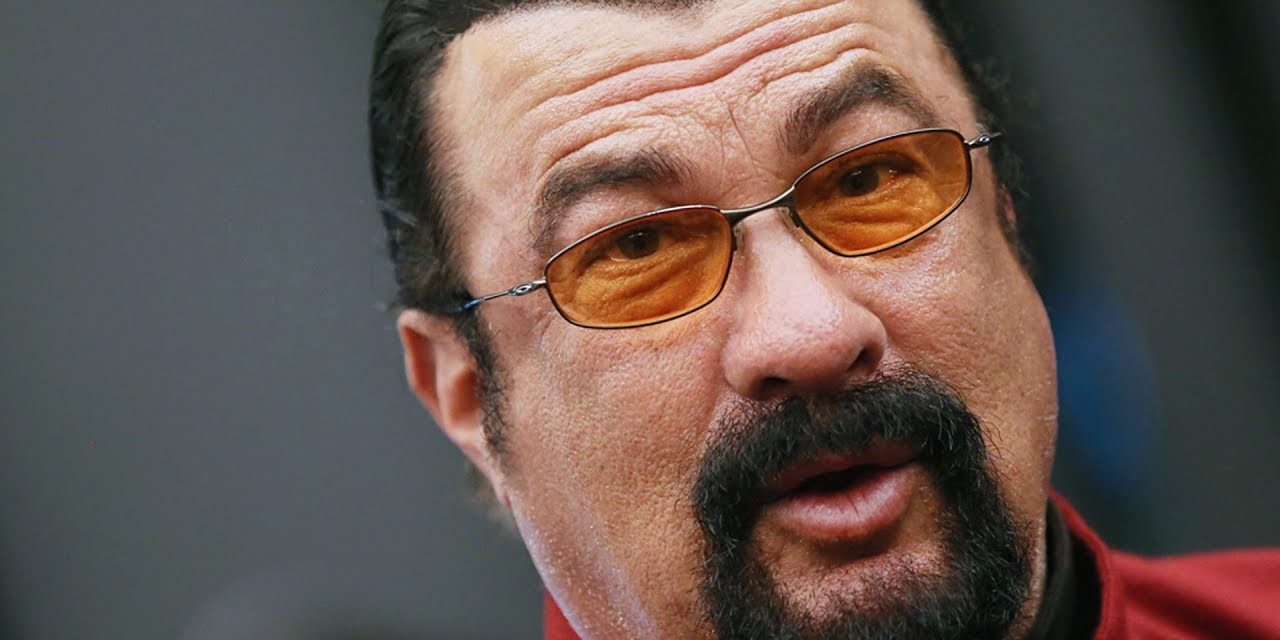 He’s Amazing, but quite possibly a total crackpot! Steven Seagal, the self-described Alpha Male, was born in Michigan in 1952. His parents Patricia and Samuel were a Medical Technician and a High School Maths teacher respectively, with a mixture of German, Dutch, Irish, Russian Jewish, English, and Mongolian Heritage.

He was a frail child, who was quite small and suffered from asthma. The family moved to California when Steven was 5 years old. He grew up to be a typical angsty teenager, locked in a garage listening to really loud rock music. His entry into martial arts came when he got a job as a dishwasher in a restaurant, ‘The Wagon Wheel’. Since he was extremely swift on his feet, the cook, who was a Japanese Shotokan karate expert, decided to give him some training on the basics of karate.

He then went on to learn Aikido until his late teens, when he moved to Japan because his father had to relocate for military reasons. He went on to be the first foreigner in Japan to operate an Aikido Dojo.

His entry into film started by being a martial arts coordinator, which would eventually lead to his first acting job on “Above The Law” in 1988. But we aren’t here to take about his films even though we’ve seen them all. What we find fascinating is some of the batshit crazy antics he’s gotten into off-screen.

Here are some of the best:

With lyrics like “I could ruin your livelihood/I could kill you I would” and ‘Me want the poonani, see for make nice/She want the buddy/Him want the poonani/And me know it nice” he would seem to be an unlikely musical match for Stevie Wonder, but he somehow managed (Threatened?) the legend to feature on his 2005 album Songs From A Crystal Cave.

It makes sense that he would enter the world of film since he tends to live in a hazy world somewhere between fact and fiction. He insists he was a student of the founder of Aikido Morihei Ueshiba. But since Ueshiba died in 1968, Seagal would have had to have been living alone in Japan at the age of 13 to be under his tutelage. He claims to have trained to CIA, fought the Yakuza with the aid of the American Mafia and insists he is one of the foremost experts on martial arts, to the point that Auction houses frequently call him for authentification purposes. He also claims to be of Italian descent, even though his own mother confirms he is definitely not.

Until 2015, the Steven Seagal Lightning Bolt Energy Drink was an actual thing. He even traveled the world to source its ingredients. “I have included in this drink everything I could to strengthen the body.” It’s key ingredients being Asian Cordyceps, Tibetan Goji Berries, and Ginseng. We’ve no idea if it tasted good or not, but it was on the market for 10 years, so it can’t have been half bad.

He ain’t shy about letting people know that when he is in the room, he’s the boss. John Leguizamo found this out the hard way on the set of Executive Decision when he burst out laughing at Seagal’s statement  “I’m in command, what I say is law, anyone not agree?” and ended up being slammed into the side of a wall by Seagal for the outburst. It’s not only male costars who were subjected to his ever increasing ego. He considered himself (and probably still does) to be a sex symbol and one that women would be only too lucky to receive attention from. Unfortunately, his idea of attention came in the groping casting-couch style. Apparently asking women to take their tops off so he can search for “Spiritual Meridian points” or to “search for lumps” is an act of generosity. Maybe he had one too many lunch dates with Bill Cosby.

None of this is really that surprising for a man who was once caught in his trailer in tears while reading what he described as the most incredible script he’d ever read. The executive who had walked in on him asked who had written the script.

Seagal replied “I did!” and went back to drowning in his own amazingness.

For a man who labels himself as the epitome of manliness, how does go on to explain a run like this?:

Have you heard any other strange things he’s said or done that you think our readers would enjoy?