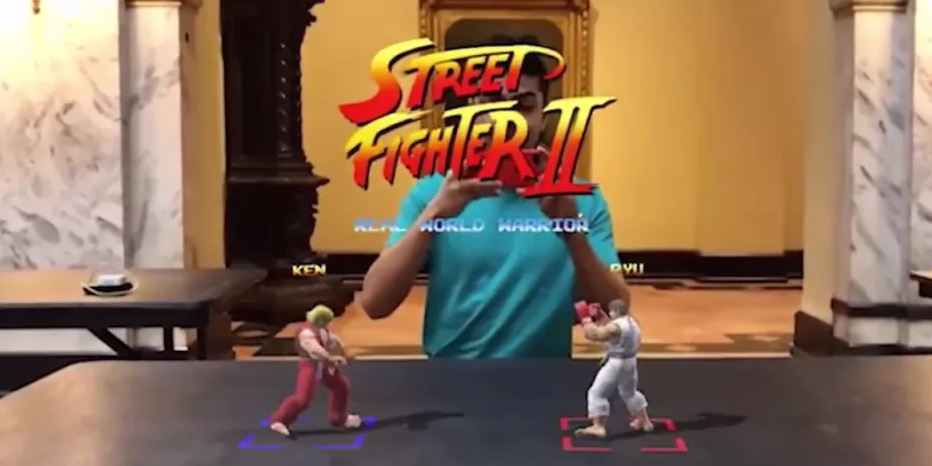 Let’s face it, AR is getting more and more popular nowadays, and video games are being brought to life (quite literally) using augmented reality!
Thanks to this savvy developer Abhishek Singh, now you can play Street Fighter with your very own smartphone device.

Using Apple’s augmented reality software, programmer Abhishek Singh was able to create a multiplayer version of the nostalgia-inducing combat game from the 1980’s.

It’s a lot like the original game, but better in so many ways.
Street Fighter II: Real World Warrior lets users play the game on a busy street, on top of tables and in parking lots.
The game title is a play on words from the real Street Fighter II: The World Warrior.
It can be played on an iPhone, but the game isn’t actually available on the App Store YET, so you can’t download it as of today.

To play, one user sets up the stage by pointing their phone at a flat surface. A second user can join in by pointing their phone at the same surface.
Both users have to have the app installed on their phone in order to play.
From there, you can select from a range of characters and then begin a match.
‘It’s kind of like a real-life Mexican standoff except you have your virtual gladiators fighting in this ring between you,’ Singh told CNET.
‘So it really is a live multiplayer AR experience, fully functional and playable,’ he added.

Singh created the game to pay homage to his childhood, when he often played it with his sister on an arcade. This isn’t the first time Singh has built an app using Apple ARKit.
He’s also behind the super creepy video of The Ring villain Samara crawling out of a TV.
The video shows Samara, a young girl murdered in the 2002 horror film, crawl out of his TV and into his home, eventually standing up and walking towards him.

Will YOU download this game once it comes out?
Tell us in the comments section below!