Who is Lee Murray? 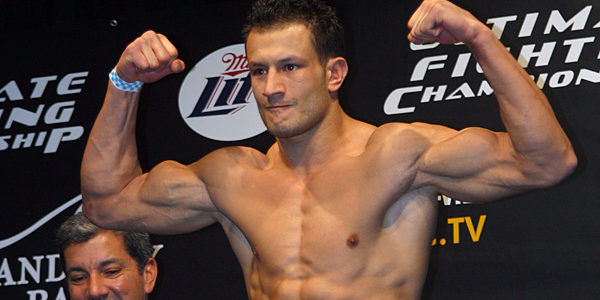 One of UFC’s most notorious combatants, Lee Murray was Britain’s hottest MMA fighter until his career imploded after being indicted for masterminding the largest cash robbery in British history.

Murray was born in 1977 and grew up in the Barnfield Projects in South London. When he reached his teenage years, Murray joined a gang and started selling drugs. It was during this time that his inclination towards violence became apparent; he was feared on the streets for his reputation. Eventually, he became the leader of the gang.

In 1999, Murray was involved in a turf war with rival drug dealers. While members of his gang were arrested, Murray was able to walk away clean.

In the same year, Murray was introduced to MMA fighting. His first pro fight was on September 5th, 1999. Murray won the bout by first round knockout. After the successful match, he continued to compete, building an impressive resume of 7-1-1 with six first-round finishes.

Although his track record already made him the UK’s biggest prospect, Murray caught the public’s eye in July 2002 when he got into a fight with Tito Ortiz, a UFC Light Heavyweight Champion, outside a nightclub. The notoriety he gained from the brawl propelled his MMA career further, earning him a contract with the UFC.

January 31st, 2004, marked Murray’s UFC debut. He won the fight against Jorge Rivera by triangle submission in the first round. After the match, he called out Ortiz. Unfortunately, the much-awaited confrontation never took place. Murray’s contract with the UFC was terminated due to visa complications from an assault case he had in the UK.

Murray’s last MMA fight signaled his downward spiral. On September 11th, 2004, he went up against Anderson Silva. Murray lost the bout by unanimous decision, and Silva went on to become UFC champion and one of the greatest MMA fighters of all time.

In 2005, Murray experienced a close brush with death when he was stabbed outside a London nightclub. As doctors fought to save his life, he was resuscitated on the operating table four times, and this marked the end of his MMA career.

After the incident, Murray disappeared from the public eye. But he resurfaced in 2006 when news broke of a security depot robbery and the theft of $90 million in cash.

The robbery took place on February 21st, 2006. Murray, and a gang of thieves dressed up as police officers used a fake unmarked police car to pull over Colin Dixon, the manager of a Securitas depot in Tonbridge, Kent, UK. The heavily-armed gang held Dixon and his family hostage, threatening his wife and young son until the manager led them inside the depot. Fourteen other staff members were also held hostage as the group proceeded to steal $90 million in cash.

A month later, many were arrested in connection with the robbery. However, Murray fled to Morocco where he lived it up – driving a gold Mercedes and residing in a $1.5 million villa. But the party came to an abrupt end on June 27th, 2006, when he and a friend were arrested at a shopping mall in Morocco. He is currently serving a 25-year sentence in a Moroccan prison.

Have you seen Lee Murray fight? Did you ever think that this could be the future of his career? (Probably not, but tell us what you think about him anyway!)