What is a Jutte? 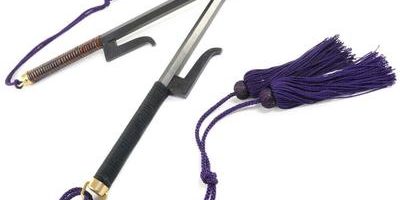 Japan, like its neighbor China, is known for originating many weapons, because of its broad range of distinct martial arts styles. Some Japanese armaments are popular due to their appearances in various forms of literature, fiction, and pop culture — we’re talking about the likes of the katana (samurai sword), the nunchaku (nunchucks), the tonfa, and the sai. However, there are also lesser-known weapons that come from better-known forms of martial arts.

One such weapon is the jutte, or jitte, both of which mean “ten hands.” Similar to the more familiar sai, the jutte is a pointed baton with more than one prong. However, the jutte only has two prongs compared to the sai’s three. Various parts of the jutte include the tsuka, or handle; the boshin, or the iron or wooden shaft of the jutte; and the kagi, or the prongs on the sides.

While the sai was traditionally wielded as a pair (yes, like the way the Teenage Mutant Ninja Turtles’ Raphael does) the jutte was taught in some schools of the stealth-based ninjutsu and even had its own discipline, called juttejutsu.

Those that preferred to use the jutte as their main weapon often paired it with a knife or a dagger in the off hand. It was also used as an alternative where swords weren’t allowed. Its main purpose was to parry and block sword attacks by trapping the blade in the space between the main shaft and the single prong. From there, the jutte user could knock his or her opponent off-balance, strike or stab with the jutte’s shaft or the knife they were also carrying, or initiate a judo-style throw.

An experienced and strong jutte user could even snap the parried blade in two with a deft twist of the jutte, but this requires a deep, master-level understanding of physics and swordcraft. (This is also why the jutte is sometimes called the “sword-breaker.”)

It was certainly a more reactive than a proactive weapon, which is most likely why it isn’t that popular. Like with many other arms, however, a specialization in the jutte could probably prove useful in most situations where people don’t expect such a weapon.

Have you ever seen the jutte before? Do you think you could handle such a weapon?