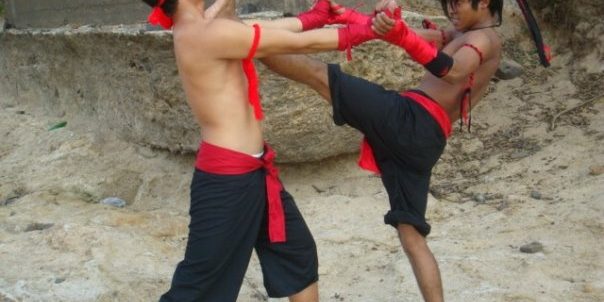 While Muay Thai remains the most popular discipline in the Indochina region, the Southeast Asian country of Cambodia is experiencing a resurgence of an old and almost forgotten way of fighting. Yuthakun Khorm — which roughly translates as “the art of war” in the Khmer language — joins native martial arts, Kun Khmer (Cambodian kickboxing) and l’Bokator (animal-style fighting) as a discipline being practiced by young Cambodians.

Founder and chairman of the Yuthakun Khorm Federation, You Sinet, has made great efforts in preserving the martial art, which is now being taught in universities, as well as the Cambodian military. Around 2,000 people are learning and practicing Yuthakun Khorm in Cambodia, but it is still relatively unknown among people, despite its long history.

According to Sinet, their research has uncovered Yuthakun Khorm was born out of the numerous wars the ancient Khmer empire had fought. They believe legendary Khmer king Jayavarman II put together the discipline from his fighting experience. Grandmaster Chan Bunthoeun, a former commando who still practices the martial art at 62 years old, explains that Yuthakun Khorm was meant to be used in battle, as it makes use of weapons on top of bare hands. They even say that dark magic spells are used to augment the fighter’s strength.

Yuthakun Khorm is now making its way into the world of mixed martial arts. Chan Bunthoeun’s son, Chan Rathana, an MMA fighter competing in ONE Championship, attributes his success to Yuthakun Khorm because of its ground grappling techniques – something that isn’t present in Kun Khmer, which focuses on standing striking.

Currently, there is a dispute between Yuthakun Khorm and l’Bokator practitioners over which Khmer martial art is the oldest, or whether Yuthakun Khorm can even be considered a distinct Cambodian fighting discipline. L’Bokator grandmaster, San Kimsean, claims that what is called Yuthakun Khorm may just be a collection of different Khmer fighting styles, as its name simply means “art of war.” Sinet retorts that l’Bokator is just a fighting style that uses a staff.

Would you be interested in learning Yuthakun Khorm? Do you believe it’s a separate martial art?