The Ridiculous Spending of Connor McGregor 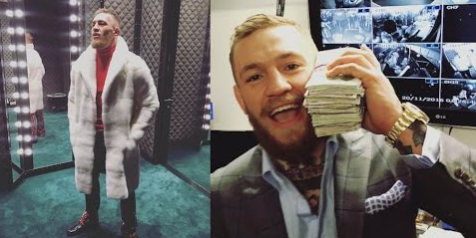 McGregor is loud, and boy is he proud! But he truly deserves everything he has achieved in the Octagon and real life, as this man is the epitome of hard work and dedication.

Blood, sweat, and tears fueled his rise to the top, and it’s only fitting that he enjoys every little moment. On that note, here are Conor McGregor’s most ridiculous purchases, which definitely show that he’s having fun with his earnings:

After years of hard work, McGregor was finally able to get his $2.5 million dream home in Dublin complete with an amazing countryside view. But this isn’t his only property, as he has several homes across America that he uses when he’s training.

Let’s face it. He’s loud. He’s notorious. As such, he eats death threats for breakfast. He spends thousands on bodyguards, not only for himself but also for his family.

The Lambo brand itself is extravagant enough, but this particular model is the epitome of luxury. A rare limited edition that costs over $250,000, it’s sure to stun anyone who sees it cruising down the road.

McGregor exemplifies the sharp-dressed man, and you can easily add “style icon” to his resume. He changes suits as often as he changes weight classes.

If his Lambo wasn’t enough, he also has a rather unique and futuristic ride. The difference? This one’s electric.

Conor’s a watch guy. And apart from his Rolexes and other fancy timepieces, he also has an Audemars Piguet in his collection – the famous million-dollar watch.

He hasn’t purchased a personal jet yet, but you won’t see him on any commercial flights. Be it for work or pleasure; he pays to fly in style!

He loves his custom suits, but he loves Gucci even more. From fur coats to fur loafers, he’s a Gucci man through and through. He even dresses his family in Gucci wear.

Did we mention that McGregor loves cars? Luckily enough, this was a gift from the manufacturer itself. It was customized for Conor with a special “Notorious” finish to boot.

McGregor takes fighting seriously. This is why he spares no expense when it comes to his fight prep. He spends on everything from facility rentals to staff salaries.

Not bad for a former plumber, don’t you think? What do you think is his most extravagant purchase?