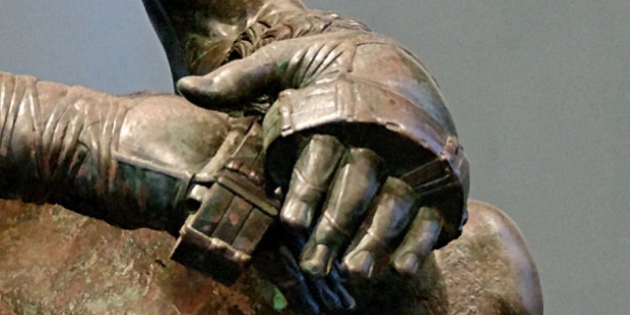 Swords, knives, and blades are pretty cool to use in martial arts, but when was the last time you got up close and delivered hits using a fist weapon? The most common type of fist weapon we’re all familiar with is the brass knuckles, mostly for how easy it is to carry around. However, there have been more sophisticated (and more awesome) fist weapons developed over history.

For example, have you ever seen an Indian pata? It’s pretty much a sword blade attached to an armored gauntlet, and the wielder held it with a bar grip. It doesn’t require finesse to use as the entire movement had to be controlled by your elbow. Another Indian fist weapon was the bagh nakh tiger claws, which had the same idea but with shorter sharp claws.

The Turkana ethnic group also wielded small finger knives that they wore like rings — but weren’t necessarily always used as weapons. Its modern equivalent is the push dagger, inspired by the ancient katar, which is a blade easily concealed in the sleeve.

A similar fist weapon called the suntetsu also existed in feudal Japan, except it was an iron rod pointed at both ends and held laterally, meant to be stabbed or spiked into an opponent.

Like the brass knuckle, there were also fist weapons meant to enhance one’s punching power. The Roman cestus (a leather glove with metal plating embedded), the gadling with which knight’s plated gauntlets were studded, the Okinawan tekko iron fist, and the modern-era SAP weighted glove are simple weapons meant to make a punch heavier.

Chinese deer horn knives are a unique fist weapon, which doesn’t fall under either of the two kinds mentioned above. Its use is taught in Baguazhang kung fu, where practitioners use it as an extension of their unarmed techniques. The deer horn knives look like their namesake and have blades protruding toward both the opponent and the wielder. It’s said that years of training are required before students even begin learning how to use the knives.

Ever wielded a fist weapon before? (Hopefully not against someone!) How do you feel it compared to a sword or club?