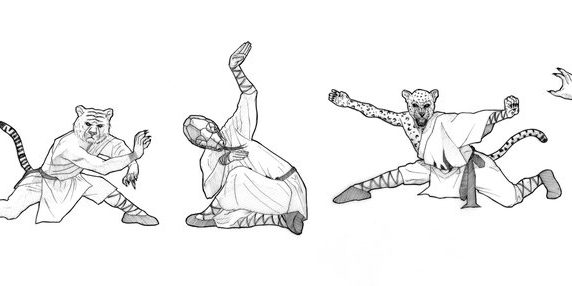 When legendary instructor Steve De Masco started martial arts in 1968, he opened up his views on the physical and philosophical sides of the Shaolin fighting arts — specifically Shaolin Kempo. After decades of study, he has described the discipline of the 5 Kung Fu Animal Styles, and what the study of each of them entails for a prospective practitioner.

There’s a Shaolin saying that goes, “Tiger strengthens the bones.” Considered as one of the most powerful animals in Chinese astrology, the Tiger is a highly popular style characterized by strength and agility. This style directly charges opponents through circular arm movements and low kicks. Its known for the Tiger Claw, an open-hand strike formed by spreading the thumb and fingers then bending them slightly. Your body needs to have a solid build, relaxed muscles, and the ability to adopt strong but quick stances.

Unlike the Tiger, the Leopard style finds strength not just in power, but through efficient and accurate stealth techniques. Its goal is to swiftly inflict pain through accurate and precise strikes targeting the soft-tissue regions and vital areas like the neck, temple, and groin. Its trademark is the Leopard Paw: a half-fist strike using your second knuckles. You’re physically required to have relaxed muscles, supple strength, and be able to quickly retract your arms and legs after a strike.

Known for its gracefulness and great defense, the Crane capitalizes on its distance from the opponent, along with overwhelming and rapid hand strikes. Its trademark move is the crane beak. This style targets soft areas such as the eyes, throat, and ribs. To master the Crane style, you should be tall, balanced, and learn to remain still for extended periods with minimal strength. It can be achieved through mobility drills, speed training, and chi-development exercises.

“Hard like steel and soft like a rope of silk.” The Snake style is typified by agility, accuracy, and explosive strikes that take opponents by surprise. The body must be thin in build and have quick muscles. It utilizes simultaneous striking and locking techniques that aim for vital body parts like the eyes, face, and throat. Its trademark moves are the Snake Hand and Spear Hand.

Strong, deceptive, and unpredictable, the Dragon embodies traits the other four Shaolin animals possess. It’s a technique that combines quick, snapping kicks, full fists, and forearms. To train for this animal style, one should have relaxed muscles and the ability to switch from soft to hard movements. The Dragon is known for its Dragon-tail Kick and Dragon Claw.

Which Kung Fu Animal Styles you would like to master, and why?