WATCH: Are North Korean soldiers as tough as they like you to believe? 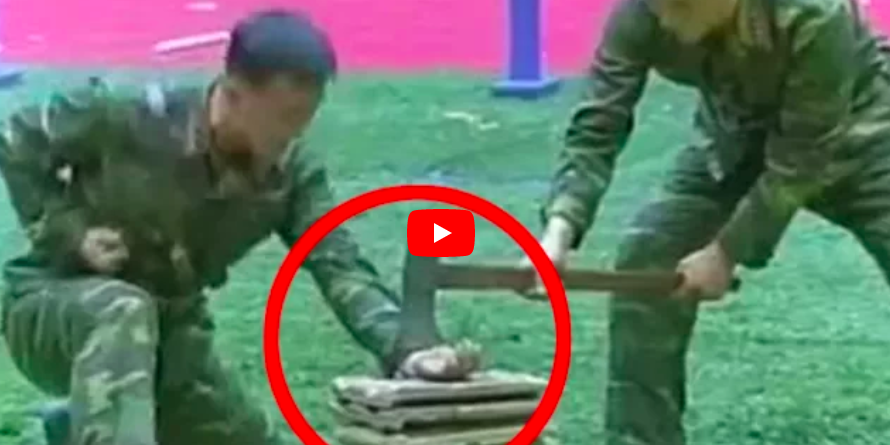 Who knew that North Korea had their own martial art? I guess it’s obvious really, they have the best everything according to their propaganda machine, so why not own their own martial art created under the reign of the Kim family? Their fighting style is unsurprisingly well choreographed, and sends a clear message to their foes – the North Korean army are ready for any threat.

Most military videos that are published by the North Korean government appear to be threatening and all-powerful, and this video is no exception. A two and a half minute promotional video with commentary by the famous and over-enthusiastic Ri Chun-hee. You know, the older lady on the state news channel that just shouts aggressively at the camera.

Patriotic in style and perfected in performance, the video is a perfect example of North Korean propaganda, but it also offers a unique insight into the martial art style of their Military – complete with flying kicks, grunts, screams and the smashing of tiles, bricks, and sticks. 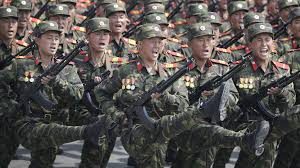 These types of performances are not unique to North Korea however, with a similar trend once seen in the Chinese People’s Liberation Army’s own promotional videos. Although recently, these styles have fallen out of fashion since Chinese generals recently admitted that breaking bricks with your face has no real battlefield application.

The Wushu style martial art demonstrates a classic trend of one vs many – with scenes that pan a row of ‘foes’ being beaten down in one quick swoop, much like something you’d see in a Bruce Lee movie. The video also features a number of men breaking bricks with their heads and hands, unfolding metal wrapped around them and taking axe strikes to the abdomen – all taking no damage at all while with each strike expelling a grunt that sounds suspiciously similar and most likely dubbed over the footage in post-production. One guy smashes two bottles on the floor before lying on them and taking a mallet to a brick resting on his chest – absolutely barbaric.

The military fight performances, with hundreds of men performing exactly the same moves together in unison, is watched over by Kim Jung Un who smiles in great pleasure – confident that his army is the strongest in the world.

Although, in more serious terms, the Taekwondo and Wushu styles displayed are not amateur by any means. In fact, Taekwondo is the martial art of choice for the South Korean CIA, used a lot more in the past while hunting for North Korean communists south of the DMZ after the two countries split in the 50s. 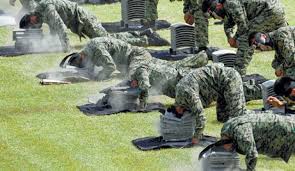 Smashing rocks and taking (blunt) axe swings to the abdomen are also not just for show – but display a form of body hardening that is something to be impressed by. Just living in North Korea most likely makes the weakest of men strong, but in many Asian martial arts – keeping your body strong, impermeable to attacks and tolerating pain is a key part of making a powerful warrior. Check out the iron bridge technique which starts on the forearm, a technique clearly displayed in the video.

Again, although absolutely barbaric, for a man to lie on a bed of glass and have a rock smashed over his chest shows great skin strength which, when caught in a real fight, is very important to prevent cuts or wounds that could otherwise hamper your fighting skill. Body hardening is a key aspect of Kung Fu too, proving that although the North Korean army are using these displays of power to display the might of their military, their men are actually hard as nails. The message is simple, North Korean soldiers are hard, strong, unrelenting and powerful. Their soldiers are well versed in martial arts but can also take a beating. No matter the number of bricks or bamboo sticks the imperialists throw at them, their communist juchen (self-reliant) superpowers will prevail every time, and despite the recent friendly interactions between North and South Korea – the two countries will always be ready to fight each other – but let’s hope they keep it in the ring during any upcoming Olympic or Asian games.