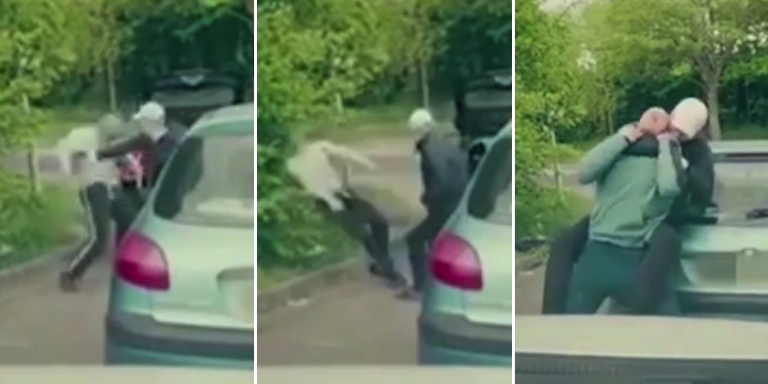 When road rage gets out of hand, only bad things can come out of it. This incident is no different, but as martial arts fans, we may have to applaud the victim for his amazing display of power and skill in dealing with two angry drivers armed with a baseball bat.

The fight, caught on a dash cam in the United Kingdom, has now gone viral with people on both sides of the fence.

We are unsure about how the fight began, or why there were such high tension, but at a small junction surrounded by greenery a car stops and a man wielding a baseball bat emerges. His anger is clear as he storms to the driver side of the car behind, and shouts expletives at the driver. Walking off, it looks like the incident is over…but then the man does something he is bound to regret.

The attacker lines up a baseball bat swing, but the victim’s clear martial arts training kick into action as he makes a perfect dodge backwards followed up by a clean right hook to the chin that knocks out his attacker on one go.

The attacker falls back into the trees on the side of the road and is not getting up anytime soon.

Suddenly, the friend of the attacker who is know couting stars on the ground jumps in and justice is served once again. The victim flips the man onto the floor before picking him up and putting him into a perfect choke hold.

In a matter of seconds, the second attacker begs for mercy, falling to the floor. The victim gets back in his car, mounts the kirb and drives off, leaving a path of destruction in his wake.

The victim, whoever he is, showed some amazing martial arts skills and his training certainly paid off. God only knows what would have happened to him if that baseball bat had come into contact with his face, and he was clearly in the right to defend himself.

However, because he drove off, fleeing the scene and not waiting for police or checking the man knocked out was even breathing , some say that his actions were too violent and he didn’t respect the rule of law after defending himself.

In the video, you can hear the couple in the car with the dash cam that caught the whole incident shout in surprise before calling the police and ambulance.

What do you think? Was the victim right to fight back or did he take it too far or was justice served to the prat who started this whole thing? Check out this video below where someone has given some hilarious commentary, and let us know in the comments!