BREAKING: McGregor turns himself in after violent backstage brawl at UFC 223 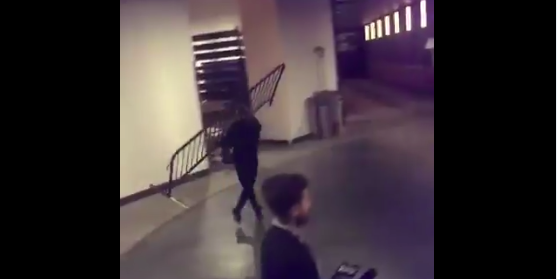 The bearded UFC star Conor McGregor has turned himself into police following an alleged backstage brawl at the UFC 223 that has resulted in three fights being canceled.

A video surfaced online showing McGregor throwing a sack-truck into a bus window full of fights after a heated press conference. One passenger suffered minor injuries following the violent outbreak and a UFC executive who was on the bus described the incident as “the scariest thing he had ever experienced.”

100% Conor was wrong but here’s some context
Khabib, & mates, cornered Conor’s mate yesterday whilst on his own.

After handing himself in, the New York Police have processed him but so far no charges have been filed.

McGregor lost control and ran wild around the Barclays Centre in New York, where a UFC press conference was being held, with a number of other people hell bent on causing damage. He was seen throwing trash cans and he even tried to throw a barricade at another bus. He obviously lost control and let his anger take over, causing fans to be shocked and appalled, and leading to the UFC cancelling three fights.

One fight involved Michael Chiesa who suffered a cut on his face due to McGregor’s antics, later announcing that he has withdrawn from Saturday’s fight against Anthony Pettis. UFC Vice President of Athlete Development, Reed Harris, described the moment the sack-truck smashed through the bus window. “When the truck entered through the window, it hit Chiesa in the head and he started gushing blood. Yes. I thought we were in big trouble.”

In a tweet that has now been deleted, Harris said “At hospital with one of my coworkers. Possible broken hand due to attack by Conor and his gang of thugs. I got cut and showered with glass. We thought we were gonna die.”

The two other fights which were cancelled included flyweight Ray Borg, who suffered multiple cornea abrasions, and Artem Lobov due to involvement in the incident.

A UFC spokesperson said in a statement that “The organization deems today’s disruption completely unacceptable and is currently working on the consequences that will follow. Individuals involved in the incident are not welcome at tomorrow’s ceremonial weigh-in or Saturday’s event at Barclays Center.”

Conor McGregor and members of his team showed up at the Barclays Center at the very end of media day moments ago. There was an altercation with some of the departing fighters who are competing on the card.

Despite his popularity, McGregor has not fought in the UFC since November 2016, and recently had his undefended 155lb championship title revoked by UFC president Dana White. In response to this, McGregor tweeted “You’ll strip me of nothing,” before heading to Brooklyn.

McGregor was obviously pissed off with such a decision, leading to this outbreak of which he may never recover.

The Irishman’s last fight was a boxing match against Floyd Mayweather Jr where he lost to his opponent on 26 August 2017.