Bully gets his ass whopped by new kid on the block 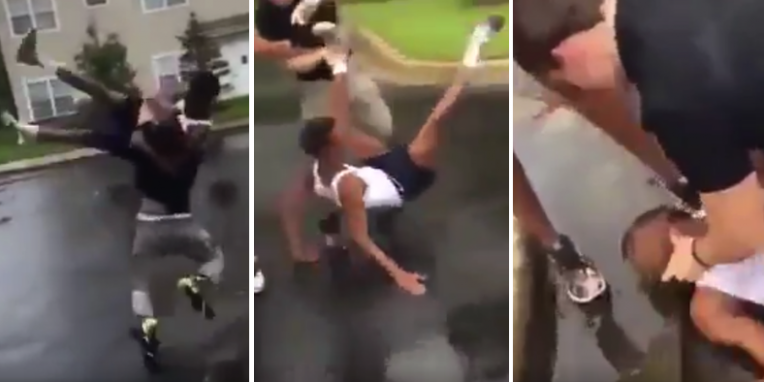 When videos like this emerge, they make us feel great. All of us at one point or another have been the ‘new kid on the block’ and sometimes that can be really tough. If you know martial arts though, it may be a good idea to keep your skills quiet just incase any asshole wants to come pick a fight.

And yup, you guessed it, that’s exactly what happened to this new kid when a local bully decided he wanted him as his new target. What a bad move that was…

In a video shared by @SmackDatBooty69, this bully picks off more than he can chew and is totally owned by a boy in beige slacks and a polo shirt. 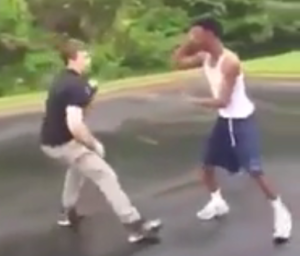 As the bully approaches the kid, he’s already in a perfect stance, bobbing and weaving in and out, leaving the bully looking like a total ametuer…which he obviously is.

He lets the bully throw a few punches – all that miss – and then moves in for the kill.

As he closes in, the bully is taken unawares and is totally hopeless as the kid initiates a clinch and executes an absolutely perfect but brutal takedown right into a puddle of wet mud.

The ones filming the fight are gasping as their ‘hero’ bully is totally destroyed on the floor as the kid pins his head to the ground, totally owning his rival. Soon enough, the bully’s friends run in to try and break up the fight but not before the kid lands a few punches to the guys head shouting “you’re going to respect me, motherfu*cker!”

As a last message of total power of this bully, the kid drags him along the floor as he breaks his hold and walks off unscathed except for a muddy stain on his knee. Absolute legend!