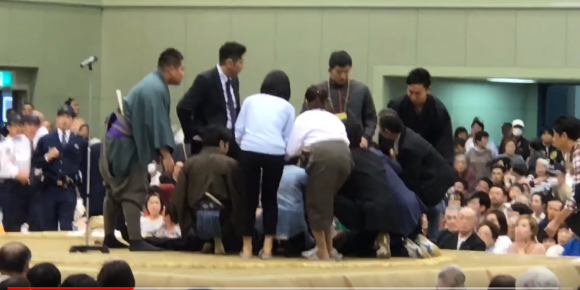 A woman who rushed into a Sumo ring to give a wrestler first aid after he collapsed, was immediacy ordered to leave, because following Sumo tradition, females are banned from the space.

In Sumo, an ancient Japanese traditional marital art, the ring in which two large wrestlers fight is regarded sacred. Being so sacred, anything impure – including women – are forbidden from entering.

Although these rules are often just accepted blindly, a case that upset the world this week emerged where a female was ordered to leave the ring after rushing in to help perform CPR on a collapsed fighter, regardless of his health at the time.

Despite the woman being forced to stop helping the man, the wrestler was eventually revived and rushed to hospital where he quickly regained a stable condition, despite perhaps feeling a little spaced out.

You can see the video below, taken just after the wrestler collapsed, and records until the man is revived, during which time the woman who tries to perform CPR is forced to leave.

The head of Japan’s Sumo Association has subsequently apologized to the woman, with Nobuyoshi Hakkaku, the sumo association’s chief stating that “The announcement [to get off the stage] was made by a referee who was upset, but it was an inappropriate act in a situation that involves one’s life.”

Spectators of the sport were unhappy however, as after the order was made to the woman to leave the ring, other sumo officials quickly rushed to the ring to throw salt at it (a traditional cleansing ritual) instead of helping the wrestler.

It seems that the purity of the ring is more important than their own fighters.

On user on Twitter accused the Sumo Association of being impure themselves with draconian thoughts such as these, saying “this is the response to someone who tried to save a life? I think we’d better sprinkle salt on the head of the sumo association.”

“Believing that tradition is more important than human lives is like a cult that mistakes fundamentalism for tradition,” Yoshinori Kobayashi, a popular comic book artist, wrote on his blog.

This is not the first time that women and Sumo have come to a loggerheads, with professors and social commentators using this as an opportunity to help expose the vast gender inequality that still affects Japan, despite its developed status in the world.