How Okinawan Karate is different to Japanese Karate 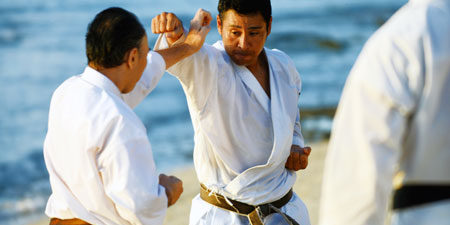 Apart from being Japan’s only ‘tropical’ island, Okinawa is also the country’s most distant island found far off the southernmost cost of the main Japanese island. The culture is different than the mainland and so is the Karate. In fact, Okinawa is actually the birthplace of karate if you didn’t know, so some may argue that Okinawan Karate is the original – but however you look at it, he are some reasons why they are actually very different. 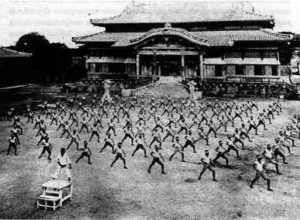 No we don’t mean smoking a bowl before entering the dojo, we mean keep your stance high. The high stances of Okinawan Karate feel more natural, and is much easier for westerners to hold – as opposed to the deep karate stances that often feel forced. For Okinawan Karate, the stance is supposed to be practical when applied in self-defense, whereas regular karate has adopted a more competitive and fitness style stance.

That last point helps bring us onto the next stark difference between the two – Karate is for sport, Okinawan Karate is a lifestyle. Over its evolution, Karate has changed many kata and added many new kumite techniques so that the sport can be scored easier in competitions. For people living in Okinawa, Karate is a lifestyle, it’s part of their cultural identity, so there is less focus on scoring points and more focus on the teachings and philosophy. Simply put, you’ll never see an Okinawan Karate master teach you a spinning hook kick to the head – it’s just so impractical! 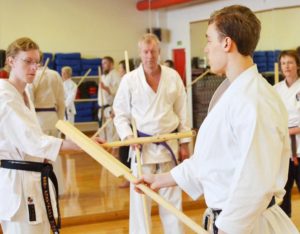 Karate is known to be an empty-handed martial art, but in Okinawa, there are weapons on the dojo wall. This is because Okinawan Karate involves Kobudo – an ancient karate art involving weapons. Although Okinawan Karate is still mostly empty-handed, a long time ago the island was plagued with war so most people carried weapons – it was the logical thing to do. The theory was, if you have never practiced against weapons, how can you fight those with weapons on the street? However, these days there is little Kobudo practiced anymore, as there is less of a ‘need’.

While Japanese Karate takes combat stances at long distance, Okinawan Karate goes in for the close range kill. This is what Tuidi is – the Okinawan method of grabbing, twisting and dislocating the joints of the opponent. It also involves choking, unbalancing, throwing, trapping and attacking nerve bundles and pressure points. Brutal. These traditions grew out of using Karate as a real form of self-defense in the real world and still exist to this day. If you look at old-school kata in regular Karate, you’ll still see similarities.

Okinawan Karate focuses on ‘imi’, which translates to ‘meaning’ in English. The meaning of a technique is often more stressed than how it is actually executed. For Okinawan Karate, it is mind over matter. Why over how. When Okinawan Karate was brought to the mainland of Japan, many of the traditions were lost in translation due to language differences at the time. This caused Japanese Karate to focus more on the action rather than what the name or term of the stance or strike was. Japanese Karate was also influenced by other, more established martial arts at the time where optimal movement patterns were of greater importance too. For Okinawan Karate however, the tradition and the understanding remained, causing the two traditions to focus on totally different things today.