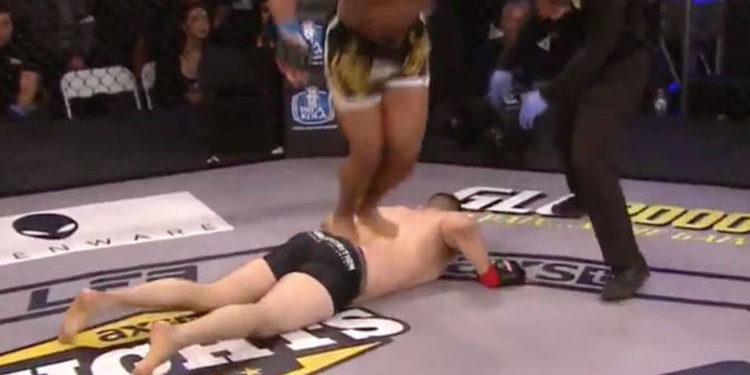 Up until UFC 229, one of the weirdest and most bizarre endings in recent MMA history resulted in a suspension for, and an apology from, the winning fighter. Actually, heavyweight Drew Chatman quickly became the losing fighter, after he was disqualified for doing a front flip off the body of his opponent, Irvins Ayala, who had essentially knocked himself out.

The referee barely had time to step in and call the bout over before Chatman got up and performed a celebration that snatched defeat from the jaws of victory at Friday’s LFA 36, held in Cabazon, Calif. Adding to the disqualification, Chatman (0-1) was suspended for 90 days by the California State Athletic Commission (via MMA Fighting), and his pay for the fight was withheld, as he was ruled to have committed violations including striking his opponent after the fight, unsportsmanlike conduct and hitting an opponent in the referee’s care.

Irvins Ayala KO’d himself throwing a hammerfist on the ground, when his chin slammed into Chatman’s knee, who was on his back in guard.

Chatman is then DQ’d at 2:39 of Round 1 for jumping on the back of an unconscious Ayala.

“Let me be honest with you, man. I don’t deserve to get paid for that,” the 23-year-old Chatman, who was making his professional debut, said to MMA Fighting “It’s disappointing watching that.
“My mother has to see that. People that look up to me and see me become an inspiration to them have to look at that. … It just happened so fast.
“So, the rules are the rules,” he continued. “And at the end of the day, when you actually look at what took place, I’m okay with having my pay taken away. I’m okay with being suspended 90 days. I’m okay with that. Because you can’t get that back.

So this happened after we went off air from #LFA36 last night. Thoughts? pic.twitter.com/WNlrNA9Za1

“The video is priceless. I have to look back at that and live with regret every single day.”
“I’m not going to play the victim here, because when you look at it the real victim here is Irvins Ayala,” Chatman said. “Let’s just be real. He showed up, he fought. It was an unfortunate mishap, but it did not have to end that way.”
Chatman explained that because it was his first fight, and the crowd was more on Ayala’s side, “it was a lot of nerves, it was a lot of emotions” for him. He expressed regret for possibly giving MMA a negative connotation among non-fans who may have seen the clip of him.
“I know that after this happened a lot of MMA guys might be upset, because I’m giving them a bad name for people who are not even familiar with mixed marital arts,” said Chatman, who acknowledged that his nickname, “The Honorable,” had earned some mockery. “Someone who doesn’t even watch mixed martial arts might turn on the television and see this and then think, ‘This is how these cage fighters are.’”
“My name is not perfect. … And I’m not ever going to be perfect,” Chatman added. “But I will guarantee you this: It will never happen again.”