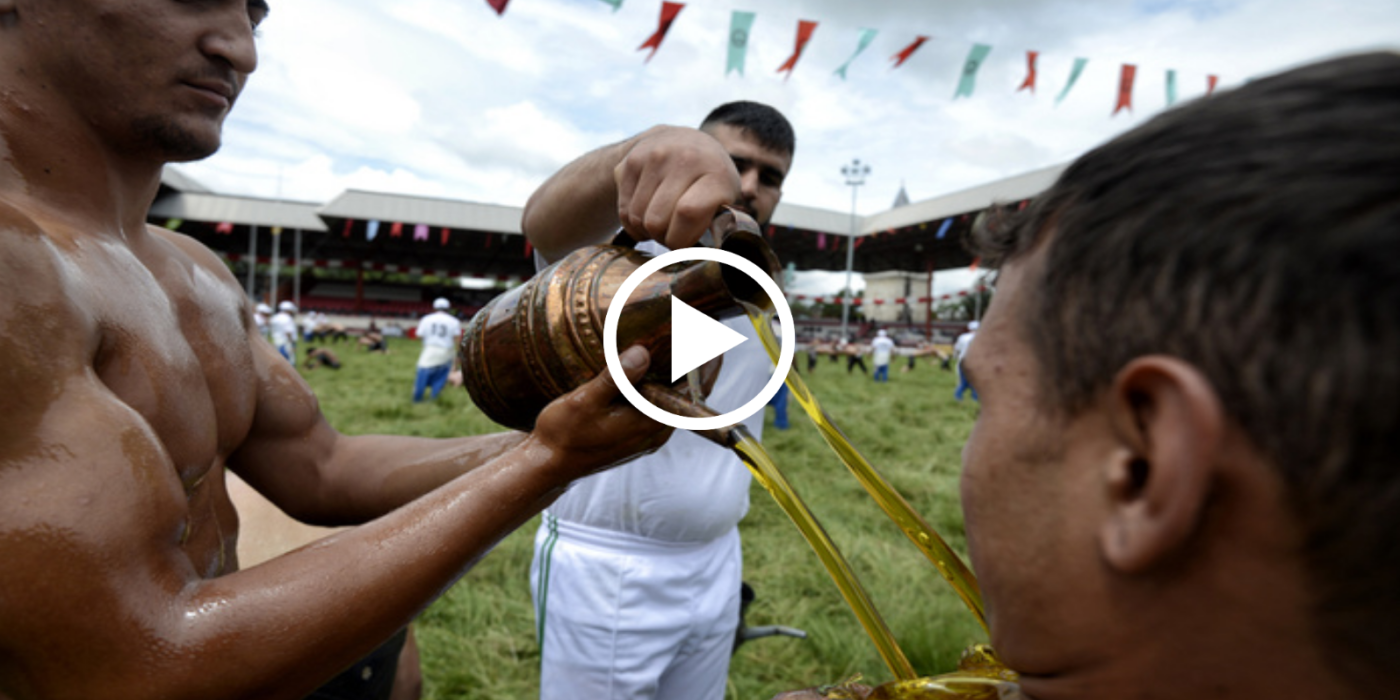 Korea has taekwondo, Brazil has capoeira, the Philippines has arnis – a martial art is a truly unique and inspired choice for a national sport. Turkey’s own choice of oil wrestling is no different – it traces its roots back to ancient times, when wrestling was very much a dominant sport in the region. 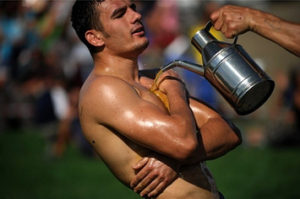 Oil wrestling, or Yagli Gures involves teams of wrestlers dousing themselves in olive oil and wearing leather pants called kisbet, then grappling each other in a quest for dominance. The slick oil makes getting a good grip all that much more difficult, and also, incidentally, highlights the physicality of the competitors. The goal is to grapple your opponent, mostly through getting a hold on his kisbet and take control of them.

This strategy has been attempted in other martial arts, but usually to dire consequences, since it is just plain against the rules. Yoshihiro Akiyama was blacklisted from MMA for dowsing himself in Olay. He also competed in Judo and was accused of greasing his Gi, but denied it, claiming that he was just a really sweaty guy. He was banned from this sport too unsurprisingly.

But in Turkey, all is good with a little grease. In fact, you could go as far as saying it is s requirement. 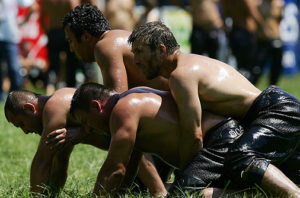 For hundreds of years, these games had no time limit, so wrestlers could be fighting for days before a clear victor is seen! These days, though, a match is limited to 30-40 minutes depending on the category, with extensions to break ties as needed.

Games are held all year round in Turkey, but the “big one” is Kirkipinar, a tournament that’s been held every year since 1346. Yes, that’s the 14th century! Yet, this centuries-old tournament is relatively young compared to oil wrestling itself, which has been around for thousands of years. It’s a truly unique martial art that shares its history with Greco-Roman wrestling, which we might know more about today. Another difference between it and the wrestling we are more is how you win. Usually, the objective would be to pin the shoulders to the ground, whereas with Yagli Gures the aim is to get your opponents navel facing upwards. The grass is often a slippery as the wrestlers, which poses another challenge in getting a firm grip. While we are on the subject of grip, you might be wondering how it is even possible to grab your opponent in the first place. Well, they wear leather trousers called kispet, which are also covered in oil and are very heavy. So the best way to tackle is to get a hold of the waistband. It is also perfectly within the rules to shove your hands and arms down your opponents’ trousers and use them as a handle to turn them around and hopefully win. So clearly there is no shyness in Turkish Oil Wrestling. 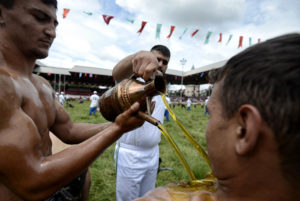 It’s always great to learn more about the more unusual martial arts from around the world. Have YOU ever tried or would you ever try Turkish oil wrestling?