Who comes to mind when you think of deadly hand-to-hand fighters? Famous martial artists like Bruce Lee? Legendary MMA strikers like Chuck Liddell? Perhaps they were good in their own fields, but nothing trains lethality in close quarters combat like actually having to fight for your life on a regular basis, in a deadly environment. William Fairbairn, perhaps the most lethal fighter in the world, was shaped by such an environment.

A member of the police in crime-ridden, British-occupied, 1900s Shanghai, Fairbairn fought in hundreds of street fights and organized his own riot control police squad, for whom he developed some of the world’s first special tactics. He fought Triad organized crime members, anti-government rebels, and a whole host of armed and unarmed criminals over the course of a decades-spanning career.

While a member of the police, he studied a variety of martial arts, including savate, wrestling and boxing. He also went on to develop his own style, which he dubbed Defendu, and which he taught to fellow policemen. In addition to hand-to-hand training, Fairbairn also developed advanced shooting techniques for the pistol, the average weapon of a policeman. His ultimate goal was to make it as deadly as possible, in as little time as possible. 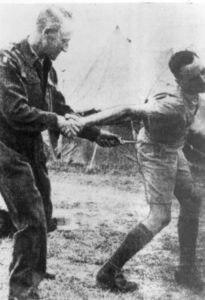 When World War II broke out, Fairbairn trained Allied commando units in efficient, deadly combat techniques, and strove to erase the idea of fair fighting; teaching them the same Defendu techniques that informed his allies in the Shanghai police. By the end of the war he had risen up to the rank of Lieutenant Colonel.

Fairbairn wasn’t just a fighter by trade – he was a fighter by necessity. He lived in a time and place of constant fighting, with his life always at risk. He had hundreds of scars in different parts of his body to describe the constant danger he was in. He adapted to this danger and became a formidable fighter who perhaps has no equal.

Do you agree that Fairbairn is the most lethal hand-to-hand fighter? Got anyone else you’d like to nominate?