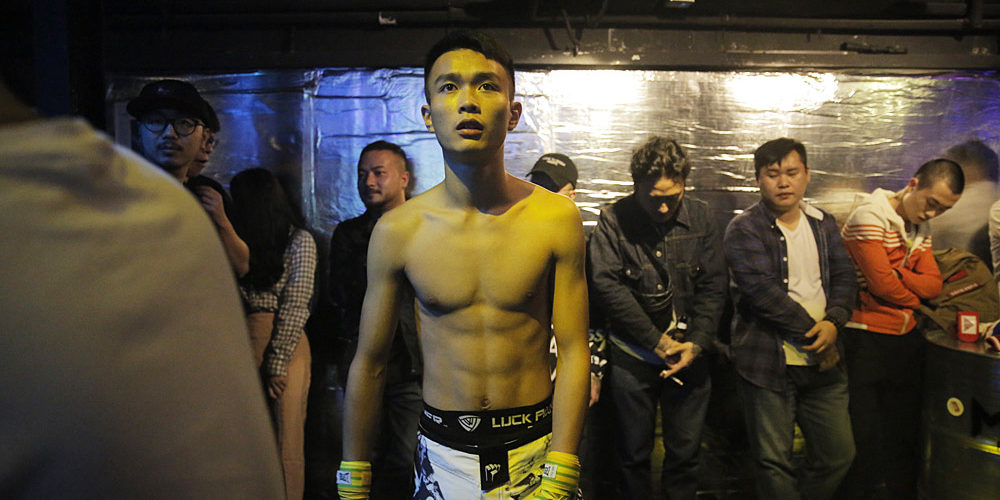 It sounds like a plot line for a terrible b-list thriller. Some boxers keen to get back in the ring open a secret fight club in a haunted mall in deep China, only to end up fight ghosts and not even realize.

Well, maybe it’s not that dramatic, but there is some truth to the story. According to Ultimate Fighter veteran Jeremy May, fights happen every night in Chengdu, China. From MMA to backstreet boxing, gang brawls to unlicensed boxing matches – the city is mad for fights.

Neon lights light up a fighting pit that smells of liquor and cigarettes, as fighters wait to enter the ring and spectators place bets and cheer. Although not unknown to the west (or the authorities) due to several publications featuring the club, this underground fighting club is a fight club nobody can talk about but everyone knows.

The city of Chengdu is famed for its wacky fights and martial arts drama. Xu Xiaodong (director of the Beijing MMA Association) got into a feud with Tai Chi master Wei Lei which ended in a fight to settle their differences. Unsurprisingly, Xu destroyed Wei in just ten seconds – perhaps proving once and for all that Tai Chi is not a fighting martial art, no matter what its masters say.

Following the drama, emerged even more drama, with Xu being caught up in a mass brawl between MMA fans and Tai Chi fans – again the odds were greatly in favor of MMA. Obviously.

The city was also home to En Bo Fight Club; another underground club that claimed it collected and adopted left-behind children and taught them martial arts, but the club ended with hundreds of children being removed and returned to their communities.

Rule No.2: You do not talk about this fight club (especially not to the parents) https://t.co/axdNdqhjHu

Monster Fight Club is soon becoming another scandal, with violent fights and interest from authorities. Run by Shi Jian and Mr. Wang, the club was initially set up in a karaoke bar after the pair were inspired by the 1999 cult movie Fight Club. Although focused on male fights, women were able to fight too but the events were much less frequent. Although not officially ‘authorized’, the owners allegedly pay off the owner of En Bo Fight Club to keep the authorities off their backs but in the end it was shut down.

Two years later, the Monster Fight Club is back and now in a new location inside the half-disused shopping mall that is famed for its ghosts.

Although still a dodgy underground fight club, their new image is a lot more palatable among the authorities who are beginning to support the club. The owners are even planning on bringing in professional talent from China and from countries such as Thailand to help teach and develop their members and trainers – and bring some high stakes fights to the Chengdu ring no doubt. And if all goes wrong, they’ve got the protection of ghosts to help keep the authorities at bay.