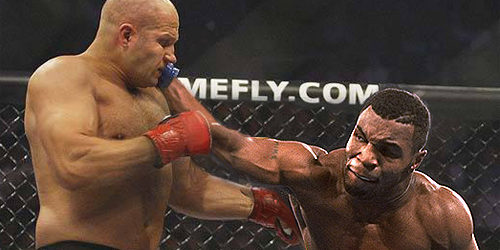 When MMA was first officially born, fighters were slow to mix styles that were too different from each other, and often debated on what the best style was. When fighting a Muay Thai stance, do you Muay Thai back or do you go in for some Jiu-jitsu to throw him off?

In the beginning, fighters like Marco Ruas and Pedro Rizzo were so effective with the Muay Thai style of fighting that it dominated MMA for some time, but as time changes, so have the styles. Mike Tyson was a pioneer that shot MMA off in another direction entirely by engineering one of the best styles of boxing ever seen – the peek-a-boo style. Moving the head, peeking from behind the gloves, bobbing up and down and moving irregularly were all part of his style that has now become the go to style that fighters like to perfect before going into the ring. 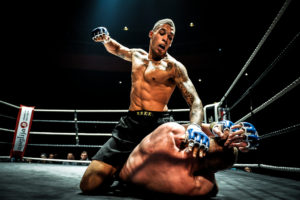 Here are four things to remember when in a MMA ring, and if you can perfect them, you’ll be laughing.

Defense is nine tenths of the fight. If you let your guard down, one well-placed fist and it’s KO. If you can keep your head moving, you can minimize contact with the opponent’s jabs, often being able to move out the way in one fluid slip. Tyson managed to perfect the slip-jab too, where he dodged the attack before placing some perfectly aligned punches while his head was still off-center mid-slip. If you can pull that off, you’re winning.

To put mathematical equations in simple terms, punches that cover a greater distance in a shorter amount of time have more velocity, which translates into a lot more power upon contact. It’s not a difficult concept to grasp but executing it can sometimes be harder than it seems. Lunge your hips and tilt your torso to help increase that velocity through the natural torque that you build up in your body. Obviously, stronger muscles will help too so don’t forget to work on your core strength in the gym too!

Timing can be very difficult, especially if your opponent is moving as unpredictably as you. You need to be alert and on the ball, and at the split second your opponent makes a move to strike then you already need to be out of the way. Take note of tip 1! If the strike doesn’t come, then use your off-center attacking ability to fight back without having to reset first. Simples!

Usually, fighters change stance while stepping forward towards their opponent. The move helps threaten them and gives you time to adjust while they are re-planning their own stance and strikes. If you can become fully ambidextrous in your punching power, then orthodox or southpaw, you’ll have the upper hand so stance becomes less of an issue. Using our Tyson reference again, he used to step so far into his opponents that their feet were both parallel and were forced to fight in a neutral, face on stance. If you can fight like that, and your opponent can’t, you may as well take the belt before the fight even begins.

If you don’t trust us, check out this video that goes into even more detail about Mike Tyson’s revolutionary style.