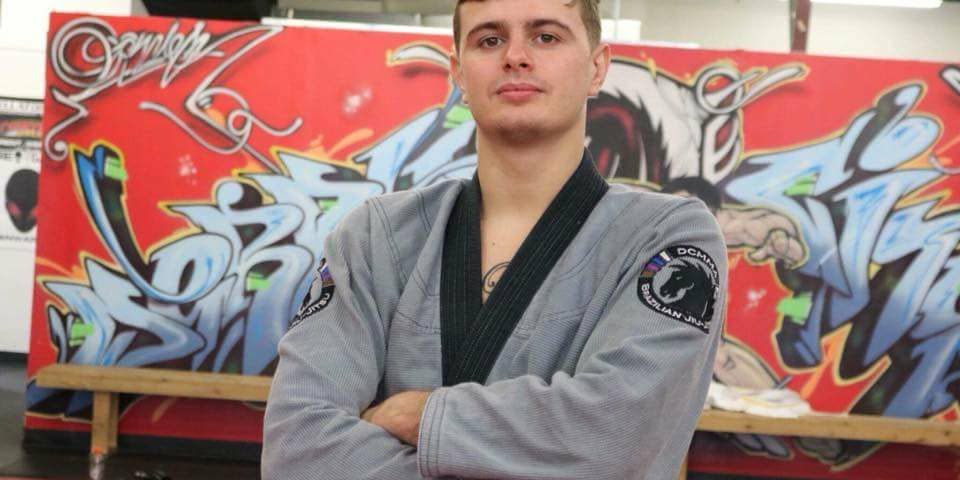 A few months back I accidentally came across a video on Instagram, shot from a Martial Arts gym in Louisville, Kentucky. The video was of a young guy addressing his fellow classmates, thanking them for their support in what had been some really tough years. He spoke of how his coach, Chewy, had taken him under his wing at a point when he was suicidal and turned his life around. He got a bit choked up at one point and had to stop. I got equally choked up watching it from my desk and after the video ended I decided I needed to know more.

(The Video below is in 2 parts: The first is his coach, but click the arrow to see Chad’s speech.)

#tbt to one of the most powerful moments in my life. As coach. We do things and we hope we’re making a positive impact on the people around us. But you don’t always know. Days like this one remind me why I do what I do. I love my “little brother” (we’re not actually brothers) and all the amazing people in our gym. #chewjitsu #bjj #brazilianjiujitsu #jiujitsu #martialarts #louisville #derbycitymma #derby @chadthebeasthardy

I contacted Chad and told him we were starting a new series here at Martial Tribes, focusing on stories from within the community of people whose lives were dramatically improved (or in this case saved), through finding their own ‘Tribe’ in martial arts. The hope is that maybe even one person out there will read one these stories at a time when they really need it the most. He was immediately on board and the next day he sent me his story. A lot of people lack the courage to be brutally honest and allow themselves to be vulnerable. Chad is not one of those people.

This is his story:

Chad was hearing voices…”He’s up! he’s up!” but something about them sounded off, like he was in a large hallway. He wasn’t able to move and his vision was blurry. The pills must have worked, and if there is a Heaven, this must be what it looks like! Soft shapes and echoed voices everywhere. But as his vision cleared, he saw the hospital ceiling, with the faces of his family and friends starring down and he knew he had failed.

Chad moved to Louisville at aged 7, with his Dad, Grandma, and 2 cousins, in order to escape gang violence in their previous hometown of Bloomington, Indiana. It was to be a fresh start after a couple of incredibly tough years where his mother had passed away and his father had been shot in the head, leaving him in a coma for about a year. Chad’s Grandma took up the parenting role while his Dad recovered and as soon as he did, they all moved.

His entry into martial arts was prompted after he was punched in the face on his first day of school in their new town. He had never been in a fight before and didn’t know how to react, so later that day his Dad enrolled him in a Taekwondo school. Three months of classes later, the same bully tried to steal his money and this time left with 6 or 7 bruises…and no money. Chad started competing in tournaments but was constantly disqualified for being too aggressive. “Every time I would fight or spar I remember that kid hitting me and I would get so angry I never wanted to be bullied again and I wasn’t going to let it happen.”.

The transition into JiuJitsu happened when his previous school relocated and a friend suggested Derby City MMA. Life in Louisville was proving to be no easier than Indiana; They had very little money. His father, although doing the best he could, had a brain injury from the coma, which resulted in extremely high blood pressure and blind rages. “I learned to get used to it but hated him at this time…everyone did”. His drug-addicted aunt would constantly come around to their house to try and steal from them and they got robbed multiple times because they lived in a really bad neighborhood. Street shootings were common.

The final straw came when at 15-16 years old, both his Grandfather and Uncle passed away and with them something in Chad also died. It is a coping mechanism a lot of people rely on, as if forcing themselves to feel nothing will mean they are immune to life’s problems. His grades at school went down and he failed every class in his freshman year. The school gave him one more chance. His Dad told him he had to pass.

The day of the test changed everything. That morning, looking in the mirror, everything felt wrong. It wasn’t just because of the test, it was the accumulation of everything leading up to this point. “I couldn’t stand the way I looked, the way I talked…the way anything was with me. I felt like I should just kill myself. Maybe the pain would go away“. He failed the test but didn’t tell his Dad, because he knew that tonight he would end his life and be gone by the time the results were sent out.

“I waited for him to go to sleep than I looked around for anything I could use. I found a knife and walked to the mirror and started crying saying “Come on do it! You’ll feel better after this”. But I couldn’t so I thought maybe I can drown myself. I started a tub and tried, but I couldn’t do that either. So I took a whole bottle of pills and thought this will do it! I walked out of the bathroom, told my dad FU pretty much and was walking to my bed to lay down and die but I passed out and made a loud thump.” He woke up in the hospital.

The turning point came after Chad was released from the hospital. His Dad made him Tacos (his favorite meal) that night because he could see he was really trying to keep it together. It took an event like this for him to see what was right in front of him the whole time, the fact that he was loved and that not only did he have a biological family, but he also had one at the Gym. They had organized a Seminar on his behalf and gave him the money made from it. “I thought, wow they really do care about me. I couldn’t wait to get back in the gym. I didn’t realize at the time how much Jiujitsu and the people at the gym actually meant to me.”

His coach Chewy and his best friend Eric started picking him up every day for the gym after this. “They would always try to talk to me about my day and the problems I had going on. It took them a while to get me to talk about everything going on. But eventually, I gave in and opened up to them. They had become like brothers to me. They were people I could depend on, talk to, train with, or just hang out with for awhile.”

“They got me to really start focusing on my Jiujitsu and it really helped. I no longer had as many bad thoughts and I focused all my energy into my Jiujitsu instead of everything else going on in my life.”

“Over the years chewy has helped me with a lot of things. He has helped get me to tournaments. He helped me start to my YouTube channel. But most importantly, he has just been there through my tough times. If something was wrong he was the only one that could read me. I felt like I could talk to him about anything. I’ve watched him change so much over the years as well. The more he grew the more I wanted to as well. I followed in his footsteps. We call each other brothers because we have trained together, lived together, taught together, and helped each other through a lot. His friendship means a lot to me and I could never repay him for all he’s done for me.” 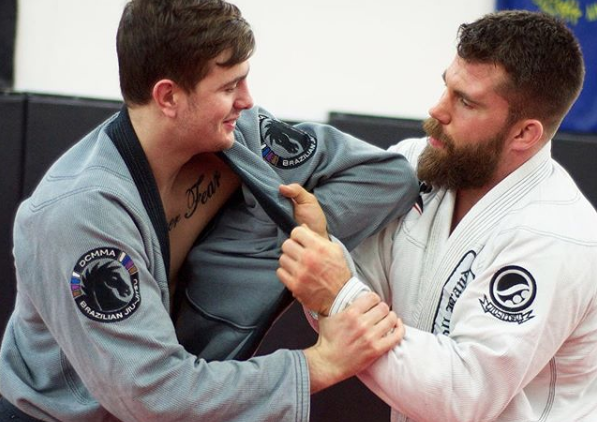 “Eric would always come to pick me up every weekend to hang. He would buy me food because he knew I couldn’t afford it. He would always invite me over to hang out with him and his kids. I was helping Chewy teach the kids classes at the time and that is how I met Eric. He became my best friend we could talk for hours about random stuff and I looked forward to going to his house every weekend to hang out with his family. He told me to stick to my dreams and pursue Jiujitsu. He always had faith in me and was my biggest fan.”  Eric passed away earlier this year. “I miss him a lot and I still can’t thank him for the confidence he gave me. May he Rest In Peace”. 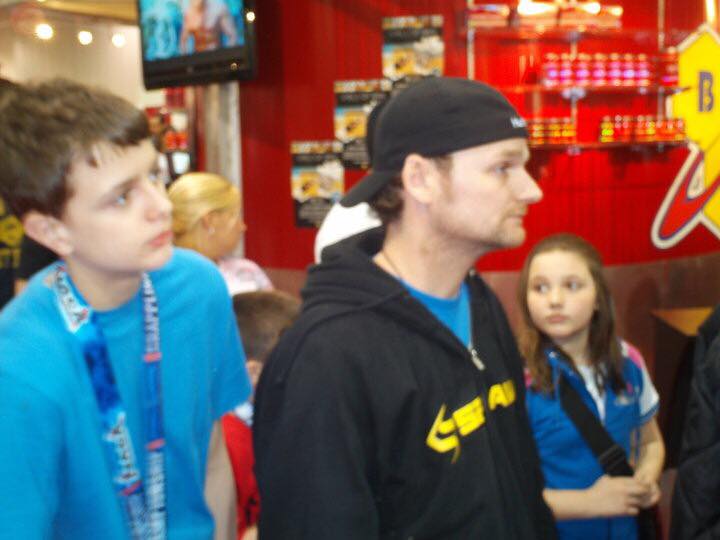 Now Chad is the head instructor of the Kids classes at the school that has given him so much and in many ways, saved his life. He is being given the chance to play the role that Chewy, Eric and the rest of the people at Derby City MMA played for him. “Already I’ve had people from my gym say I’ve saved their life. Parents come up to me and say their kid has really changed or they really look up to you. I am trying to be the best role model I can to these kids and help them as Chewy helped me. Give them a positive role model to look up to and follow after. It lights up my day seeing the transformations of people. It’s hard sometimes but the end results make everything worth it.“ 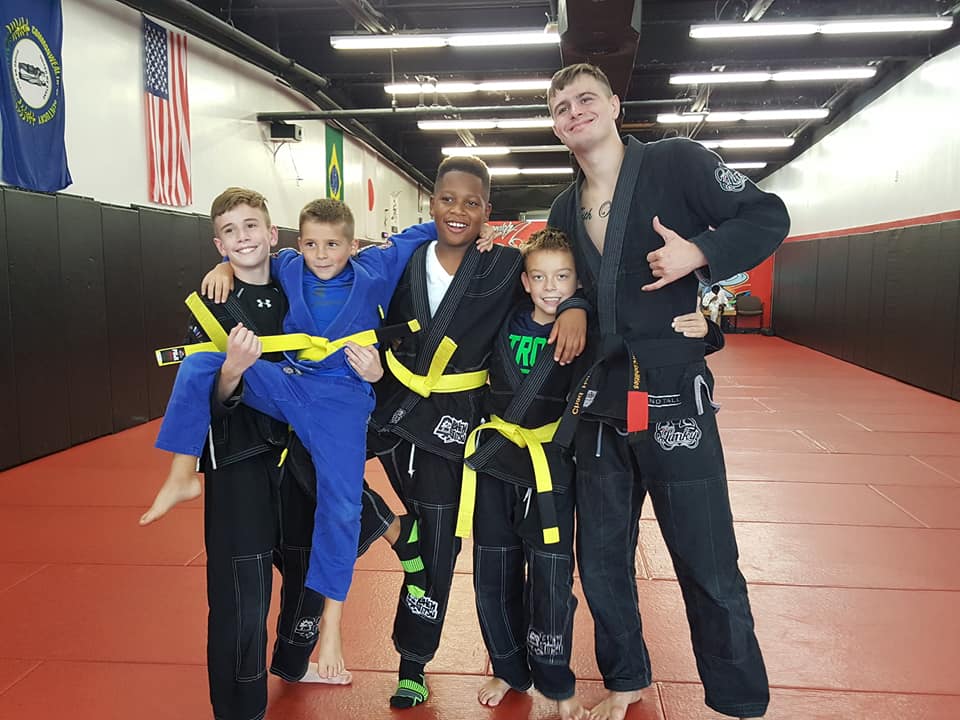 “I am teaching kids and adults all over the world. I’m traveling for tournaments and seminars. Living the dream because the path they set me on. If I didn’t meet key people in my life I wouldn’t be here. If I didn’t get punched in the face that day and my dad didn’t bring me in for a martial arts class, I wouldn’t be standing here today. Everything happens for a reason in your life.“